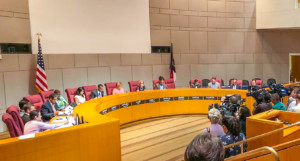 The changes are similar to what the city council passed in 2016, a move that sparked the state to pass the controversial HB2, but this time, the Charlotte City Council did not include language about restroom facility usage.

According to a press release from the city, the new measure amends the city’s ordinances “to include familial status, sexual orientation, gender identity, gender expression, veteran status, pregnancy and natural hairstyle as classes protected against discrimination,” as well as adding “employment protections for all new and existing protected classes”.

You can read a draft of the changes here.

What do you think about the changes?