In one of the most shocking announcements of the year, Panthers owner Jerry Richardson has just announced that he will be selling the Carolina Panthers at the conclusion of the 2017-18 season. In it, Richardson states;

“There has been no greater mission or purpose in my life than to have brought an NFL franchise to Charlotte…I always knew that if given the chance, The Carolinas would rise to the occasion…”

“…I believe that it is time to turn the franchise over to new ownership. Therefore, I will put the team up for sale at the conclusion of this NFL season. We will not begin the sale process, nor will we entertain any inquiries, until the very last game is played. I hope everyone in this organization will be firmly focused on just one mission: To play and win the Super Bowl…”

The announcement of the sale comes less than a day after shocking new revelations into Richardson’s workplace misconduct investigation.

Yesterday morning Sports Illustrated released an exclusive report that details 4 settlements with former Panthers employees after alleged sexual misconduct. Since the former employees signed non-disclosure and non-disparagement clauses, they would not be allowed to release the names of the former employees.

The report notes that, while at work, Richardson “would ask women to turn around so he could admire their backsides. Then, in his rolling Southern drawl, he’d offer comment, drawing from a store of one-liners he’d recycle each week. Among those in heaviest rotation: ‘Show me how you wiggle to get those jeans up. I bet you had to lay down on your bed to fit into those jeans. Did you step into those jeans or did you have to jump into them?'”

The former employees said that his comments were often dismissed due to the owners status and age. “No one ever said anything, at least not that I heard,” says one former Panthers employee. “He was the boss. It was [viewed] more of a creepy-old-man thing than a threat.”

NFL spokesman Brian McCarthy said that the league cannot make any comments about the Sports Illustrated report at this time due to the ongoing investigation. 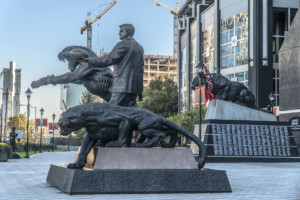 Now that we know Richardson will be selling the team at the end of the is season, the big question is, will they stay in Charlotte?

The contract says that if the team seeks to leave during that window, the city can take them to Mecklenburg Superior Court to prevent them from leaving.

But after June 2019, there is no requirement the team stay in Charlotte.

If the team leaves after June 2019, the contract says the city would have either the option of buying the stadium for fair market value or the Panthers would pay the city the remaining debt payment on the city’s $75 million investment.

The Panthers currently has a 6 year ‘tether’ contract in place with the city of Charlotte that will be ending in 2019.

In April of 2013, Charlotte agreed to spend $87.5 million on stadium improvements and other expenses if The Panthers would agree to stay in the city for at least 6 more years.

Whoever buys the team at the end of this season will have to keep the team here until then, but after June of 2019, they will certainly have some powerful leverage with the city.

They could ask the city for more money for stadium or team improvement, ask for a completely new stadium, or simply move the team to a new city that might offer them an even better stadium and perks.