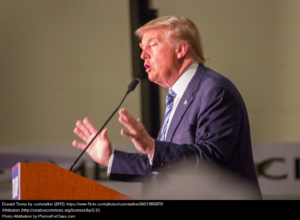 This coming Saturday, October 7th, Air Force One will be flying to North Carolina for President Trump’s latest campaign fundraiser at the home of Businessman Louis DeJoy, in Greensboro, NC.

The dinner will cost $2,700 for individuals, and $15,000 per couple for ‘preferred seating’ and a VIP reception earlier than or after the president speaks, according to an E-mail invitation.

The invitation also notes that there will be recommended donation ranges of $100,000, $50,000, and $35,000 per couple to help President Trump and the Republican Nationwide Committee with future political campaigns.

DeJoy commented, “The President and his group have had some missteps. Nevertheless, it’s onerous to disclaim the acute and unreasonable challenges he faces from the political institution, the left wing teams, the media and most of the federal staff of the businesses of the Government department.”