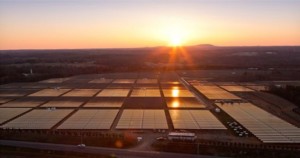 According to the SEIA’s U.S. Solar Market Insight report, North Carolina has officially beat out Arizona to become the second-biggest solar-producing state in the country.

The report notes the following facts about the Tar Heel state;

Over the past few years, our state has seen billions of dollars committed for new solar projects. One of our state’s biggest solar facilities (which is now being added onto) is Apple’s solar array in Maiden, NC, used to power it’s massive east coast cloud data center.

Duke Energy has been on of the main driving forces in our state’s solar growth, as it has been both building, and buying up the majority of new solar power.

“North Carolina’s growth in solar power is a combination of many stakeholders working together. Our plan at Duke Energy is to continue to add to our current 35 solar plants in the state – and purchase additional renewable energy for our customers,” commented Randy Wheeless, a spokesman for Duke Energy.