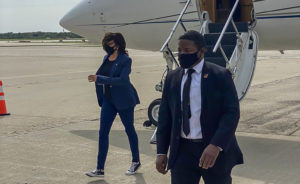 Vice Presidential candidate Kamala Harris just announced plans to come to Charlotte to speak this coming Wednesday, according to a press release we received this morning. She will be traveling to the Queen City on the same day President Trump is planning on holding a massive rally in Gastonia.

Harris was originally scheduled to travel to Charlotte on October 15th, but was forced to cancel her plans after 2 staffers tested positive for COVID-19.

On October 21st, President Trump will fly into the Gastonia Municipal Airport and Senator Harris will fly into the Charlotte Douglas Airport to hold separate speaking engagements just 3 weeks out before the November 3rd election.

Details have not yet been announced where Harris will be speaking on Wednesday.