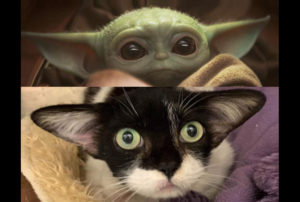 The internet now has a new favorite cat, and it currently lives right here in the Charlotte area.

The cat was initially brought to the Cabarrus Animal Hospital on December 15th with a deep wound around her neck, an upper respiratory infection, a flea infestation, and intestinal parasites.

According to HSRC, “Baby Yoda Cat” won’t be available for adoption until she is able to recover from all her ailments.

“The rescue is accepting local applications, but she won’t officially be available for adoption until her wounds are healed, she is spayed, microchipped, and receives her second round of vaccines and dewormer…”

You can follow her progress and find out when she will be ready for adoption by following her personal Facebook page here.