South Carolina’s Governor Henry McMaster just issued an executive order declaring a state of emergency in preparation for Hurricane Irma. The order urges South Carolinians to prepare for a possible direct hurricane strike on the state.

The executive order directs all South Carolina agencies to coordinate resources to prepare for the inbound Category 5 Hurricane.

“The state of emergency allows one of the best, most experienced emergency response teams in the entire world to begin organizing response efforts,” said Gov. Henry McMaster. “South Carolina is fortunate to have time to allow us to prepare for Hurricane Irma’s potential landfall, and it is important that families and individuals in vulnerable areas use that time to review safety plans in case they are needed.”

Here is the press conference held after the State of Emergency was declared;

The National Hurricane Center is now anticipating Hurricane Irma to strike the South Carolina coast on the afternoon of September 11th;

If you live anywhere near the South Carolina coast, you should immediately start reviewing your safety plans, become familiar with local evacuation routes (located in the 2017 S.C. Hurricane Guide).

The governor also issued this warning to all South Carolina residents, especially near the coast;

Know your route, fill your prescriptions and gas tank, take care of your animals, and be ready to leave and not return for several days.

If you do not plan on evacuating, make sure your hurricane supply kit is stocked and ready to use in case you lose power or get stuck in flash flooding.

Do you have each of these items in your emergency kit? https://t.co/HKuYoaV91Z pic.twitter.com/YeapfWh0jS

Other items to consider would be candles, matches, blankets, extra clothes, and self-defense weapons (for protection against possible vandalism/looting).

The forecast for Hurricane Irma continues to show a strong possibility of the storm avoiding landfall with Florida and continuing up the coast toward the Carolinas in full force: 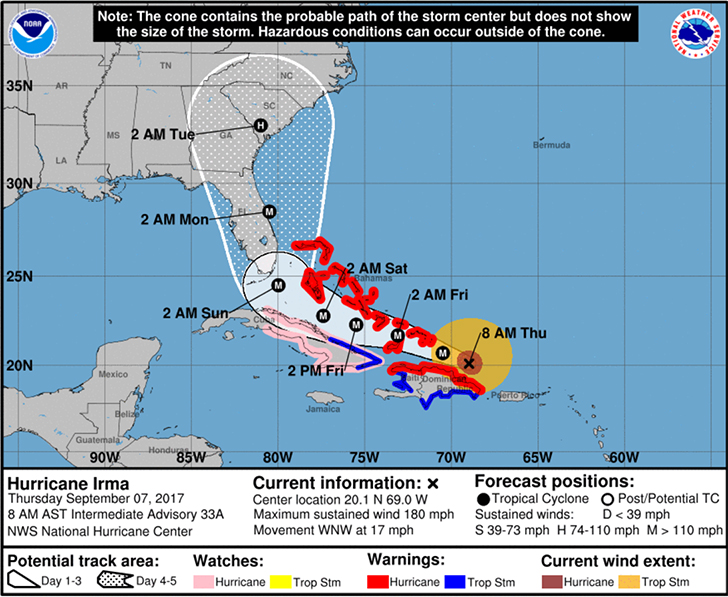