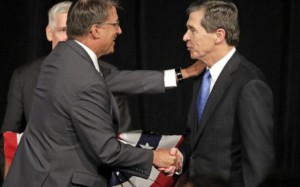 According to the latest figures on the NC State Board of Elections, Roy Cooper’s lead over current Governor Pat McCrory has just increased to 9,558 votes as of Monday evening, which is almost double what it was on Election Day.

The difference is now approaching the 10,000-vote cutoff point, at which point Governor McCrory would not be able to request an official recount.

Last week, the governor asked for a recount, but then said he would withdraw that demand if the state elections board agreed to a hand recount of Durham County votes.

Many Roy Cooper supporters even started protesting outside of the governor mansion last week – going so far as renting a U-Haul truck as a protest prop.

The final outcome of the election is now expected to be determined by the end of this year after all the pending litigation is resolved.