“Wings Over Wayne” is one of the world’s best air shows,” said Chuck Allen, Mayor of Goldsboro. “Seymour Johnson does a phenomenal job attracting the best lineup of airpower and performers, alongside the F-15E Strike Eagle and KC-135 aircraft already stationed at the base.”
Located in Goldsboro, the seat of Wayne County, Seymour Johnson Air Force Base will stage and choreograph the Wings Over Wayne Air Show on Saturday and Sunday, April 27-28. Headlining the exhibition from Nellis Air Force Base in Nevada, is the premier Air Force jet demonstration team, the Thunderbirds. The gates open each day at 9 AM, with aerial displays from 11 AM until 4:30 PM.
“As our guests, you will be able to see world-class acrobatics and ground demonstrations that are truly a sight to be seen,” said Colonel Donn Yates, Commander of Seymour Johnson’s 4thFighter Wing. “Some of the performers scheduled include the F-35 Demonstration Team, Tora! Tora! Tora!, the US Army Black Daggers, the B-2 Spirit, and other elite aircraft within the Air Force Arsenal.”
Wings Over Wayne is a family-friendly expo including the Kids’ Zone, occupying one of the largest aircraft hangars on the base. A $10 admission charge covers access to the Zone for the entire day. “There is something for everyone,” said Colonel Yates. “Come out and witness this spectacular show while enjoying great food and fun with your family and ours.”
“For the more serious air show enthusiasts, the two-day show has evolved into an air show week,” said Mayor Allen. “Performing aircraft and dozens of display aircraft generally fly in on Tuesday, Wednesday, and Thursday. The Thunderbirds rehearsal is Friday afternoon. Anywhere near the base with an open view will allow for a good air show preview.”
Combat ready within 72-hours, the Thunderbirds perform approximately 40 breathtaking formation and solo maneuvers in an air and ground show lasting about 75 minutes. The squadron consists of eight F-16 Fighting Falcon pilots, four support officers, four civilians, and more than 100 enlisted personnel performing about 30 job specialties. 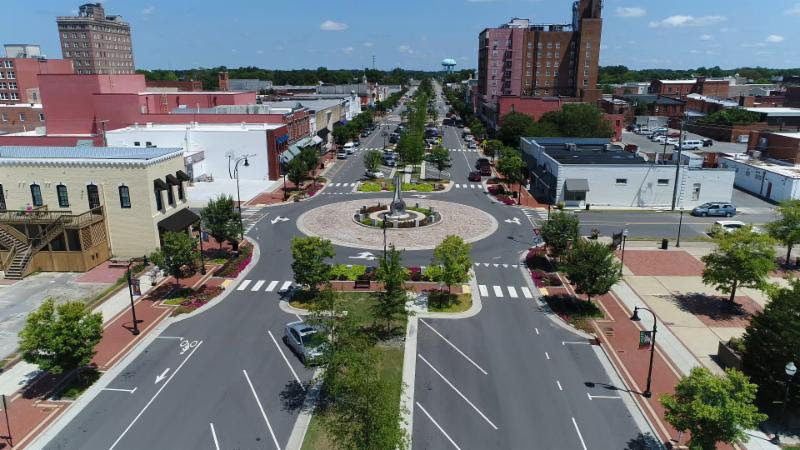 During air show week, Goldsboro offers many activities for early arrivals and enthusiasts. These include behind the scenes tours of Seymour Johnson Air Force Base; a history tour including Bridge Battlefield and revitalized downtown; a North Carolina Barbeque Trail Tasting Tour, including Wilber’s BBQ, Grady’s BBQ, and Adam’s Roadside BBQ; the Ghosts of Goldsborough Tour; parks activities and more. Tour tickets are limited, and reservations are recommended.
The Wings Over Wayne Air Show, presented every two years, was named ‘Event of the Year’ by the North Carolina Association of Festivals and Events, attracting more than 230,000 people in 2017.

Seymour Johnson Air Force Base is home to the 4th Fighter Wing and 916th Air Refueling Wing. The base opened in 1942 during World War II; closed in 1947; and reopened in 1956. Formerly commanded by Chuck Yeager, the 4th Fighter Wing is one of the largest wings in the United States Air Force, attaining a highly decorated history spanning more than 75 years.