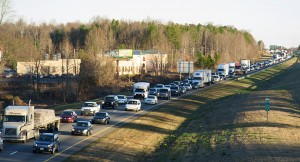 A new North Carolina bill has just been filed that would fine people for driving too slow in the passing lane.

Senate Bill 303 would issue a $200 fine to drivers who are caught driving below the speed limit or “impeding the flow of traffic” in the left lane of any highway in the state – unless the driver is actively passing another car or preparing for a left turn.

It specifically defines “impeding the flow of traffic” as when “the person knows or reasonably should know that he or she is being overtaken from the rear by a vehicle traveling at a higher rate of speed.”

The new potential law is being co-sponsored by Republican Sens. Tom McInnis of Rockingham and Jim Davis of Macon County.

North Carolina does already requires slower vehicles to keep right, but our state doesn’t yet spell out specific penalties. If the bill passes, the state would join at least five other states that fine people for driving too slow in passing lanes, according to PBS Newshour.

What do you think about the new bill? Do you think people should be fined for driving slow in the left lane?