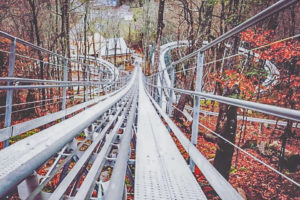 The new ‘Wilderness Run Alpine Coaster’ will feature 2-person carts that wind through trees, over rocks, and around 360-degree loops on over 2,160 feet of track at speeds up to 27 MPH. The coaster will be just slightly longer than the legendary Canyon Flyer Coaster, America’s first alpine coaster which opened in 2014 (there are currently just 34 alpine coasters in the entire United States).

Tickets will cost $15 for adults and there will be discounts for children and military personnel announced at a later date.

Here’s an exclusive preview of what a ride on the coaster will be like;

The new Wilderness Run Alpine Coaster is located along NC 184 at 3229 Tynecastle Highway in Banner Elk, about 2 hours Northwest of Charlotte.

The park hopes to officially open sometime next month.