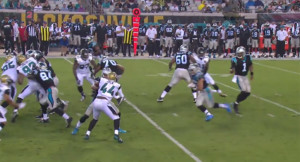 Cam Newton, Ryan Kalil, and Curtis Samuel took the field for the first time last night during their second preseason win against the Jacksonville Jaguars down in Jacksonville. Luke Kuechly also played in his second game after missing last week with sore ribs.

Newton was only in the game for a brief time, but he was able to throw for 21 yards and a touchdown – a great morale boost for his first time on the field since undergoing shoulder surgery.

“It was good. It was just a culmination of a lot of things, really,” Newton said. “A great week of practice; guys focusing in. It just showed. A lot of guys were anxious to produce, including myself.”

Our defense finished with three sacks in the first half, with Bryan Cox Jr. and Thomas Davis registering the other two sacks, confirming the likelihood of another strong defensive year for the Panthers.

Our second half wasn’t as promising as 2nd and 3rd string players filled the roster. We just narrowly walked away with the victory, finishing with a score of 24-23.

The Panthers will return home for their last preseason game against the Pittsburgh Steelers next Thursday night. Tickets are starting at $31 each on TicketNetwork.com.