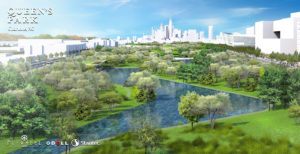 NC Governor Roy Cooper today announced the N.C. Parks and Recreation Trust Fund (PARTF) will give over $17 million in grants to 39 local parks and recreation projects across North Carolina.

“Our parks and recreation areas are so valuable to our communities and they’ve become more popular than ever,” said Cooper in a press release. “These projects we’re funding today will give people even more opportunities in North Carolina to build healthier and happier lives.”

The Authority considered 49 local grant applications requesting $20.9 million in total. The maximum grant awarded for a single project was $500,000. Awardees must match funds dollar-for-dollar for the awarded amount.

This year, $17.9 million was allocated to PARTF for local projects—an amount at least triple that of most years in the last decade. With these awards, PARTF has now made more than 1,000 grants to build parks in communities across the state.

The following are all of this year’s grant recipients: