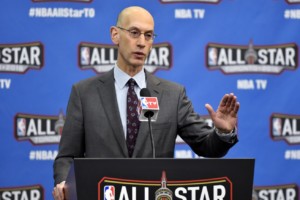 The NBA has just announced that they have made the decision to pull the All-Star game out of Charlotte and move it to another city (New Orleans is the leading contender at this point).

“While we recognize that the NBA cannot choose the law in every city, state, and country in which we do business, we do not believe we can successfully host our All-Star festivities in Charlotte in the climate created by HB2,” the league commented in a statement.

The NBA has been one of the most vocal opponents of North Carolina’s HB2 since it was first passed back on March 23rd. The major clauses of HB2 initially included; #1 banning cities from adding any new protected classes to non-discrimination ordinances (such as LGBT or gender identity), #2 prohibiting any local minimum wage increase beyond what is set by the state, and #3 stipulating that in all public facilities across the state, people must use the restroom that corresponds to their biological sex.

After several major musicians canceled their shows in North Carolina, PayPal decided not to hire 400 new employees in the state, and the NBA continued to threaten to pull the All-Star game, Governor McCrory signed Executive Order 93. The new order; #1 added sexual orientation and gender identity protections for state employees, and #2 gave private businesses and local governments the right to establish their own non-discrimination policies.

The NBA remained persistent, however, that they wanted the entire HB2 law removed from the North Carolina books, and today, July 21st, they officially pulled out.

The Charlotte Chamber of Commerce released the following statement:

“Charlotte has been and will continue to be a city that embraces and promotes diversity, inclusiveness and equality.  We oppose discrimination in all forms.

We are disappointed that the NBA All Star Game is being moved elsewhere.

We will continue working with local, state and federal representatives to pursue policy solutions that uphold fairness and equality for everyone.  We will continue to work to ensure that Charlotte continues to be on open, welcoming and safe city for all people, including members of the LGBT community.” “The sports and entertainment elite, Attorney General Roy Cooper and the liberal media have for months misrepresented our laws and maligned the people of North Carolina simply because most people believe boys and girls should be able to use school bathrooms, locker rooms and showers without the opposite sex present.

Twenty-one other states have joined North Carolina to challenge the federal overreach by the Obama administration mandating their bathroom policies in all businesses and schools instead of allowing accommodations for unique circumstances.

Left-wing special interest groups have no moral authority to try and intimidate the large majority of American parents who agree in common-sense bathroom and shower privacy for our children. American families should be on notice that the selective corporate elite are imposing their political will on communities on which they do business in, thus bypassing the democratic and legal process.”

“We are disappointed that Commissioner Silver has decided to cancel the League’s commitment to the City of Charlotte, the Charlotte Hornets, and the people of North Carolina over the League’s desire to give in to the bullying by radical left-wing groups like the Human Rights Campaign and Equality NC. The League has decided that advancing a political agenda that embraces allowing grown men into the bathrooms and showers of young girls is more important than protecting the privacy and safety of their fans. Our telephone conversations with the customer service staff at the Superdome Box Office this week indicate the stadium in New Orleans has the same bathroom policies as Time Warner Arena in Charlotte.

It is ironic that the NBA would choose to relocate their All-Star game to the State of Louisiana since last month the state joined North Carolina and 22 other states to stop President Obama’s transgender bathroom directive granting boys access into girls’ bathrooms, locker rooms and shower facilities in schools and universities.”

What are your thoughts about HB2 and the NBA pulling out?