As Donald Trump was telling his Rock Hill, SC supporters this past Friday night that Syrian refugees who come to America “probably are ISIS,” a woman sitting in the stands behind him silently stood up.

The crowd soon erupted, chanting: “Trump! Trump! Trump!” (which they were told to do as a formal signal for security to remove someone). 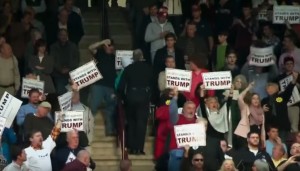 Rose Hamid, a 56-year-old flight attendant, was interviewed after the rally by CNN. Hamid told reporters that some of the Trump supporters sitting near her were kind and apologized as she was led out. But she said others accused her of having a bomb or shouted “Get out!”

“This demonstrates how when you start dehumanizing the other, it can turn people into very hateful, ugly people. It needs to be known,” she remarked to CNN.

Many people took to Twitter to show their support for Rose;

Muslim woman, Rose Hamid, w/ good will attends Trump rally assuming his supporters have never met a Muslim. Result? They kick her out.

So thankful for beautiful souls. #RoseHamid

Unbelievable. I am sorry, Rose Hamid, that my home town @RockHillSCCity treated you this way. We are not all bigots. https://t.co/rootIW7xVR

While others said she knew she would be kicked out;

Anyone who doesn't realize that #RoseHamid is an activist who carefully orchestrated her stunt last night is dumb https://t.co/qmfDNqsLdi

Silently being disruptive is the same as yelling! Don't expect cupcakes from us #RoseHamid when u are protesting at our peaceful rallies! ??

So, @realDonaldTrump expelled Rose Hamid, and they demand that *TRUMP* apologize? https://t.co/0Qww30qgha

Do you think she should have been removed?