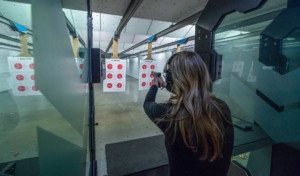 Everyone has a story, a fear to overcome and a mountain to climb. Mine just so happens involves firearms. I never imagined that I would hold a gun, much less fire one. I grew up in New York and didn’t live in the best of neighborhoods. I would frequently hear gunshots in the night, followed by police sirens. Some nights, it would be my home alarm going off. For me, firearms were associated with negative experiences and memories.

I moved to South Carolina when I was 15.  Things were different to say the least. Kids in SC grow up around guns for hunting and self-defense. I was offered numerous opportunities to go hunting and to learn to shoot. I declined.

I shot my first gun in the Northwoods of Wisconsin.   I fired five rounds that day. I was 22 years old. Even all those years later, I was uncomfortable holding an object that once scared me so much as a child.  I could not bear to fire more than five rounds.

A couple of months later, my boyfriend took me shooting and taught me as much as he knew. I wanted to learn, I wanted to conquer this fear and start my relationship with guns all over. It wasn’t easy. The second time he took me shooting, I ended up crying the whole way home. His family grew up around guns.  His father, and two brothers were amazing shooters. I was continually getting frustrated with my inability to hit the target. Tips, pointer, and instructions were coming at me from all angles.  It was confusing and my skills were not developing. The noise was overwhelming.

The last gun I shot for the day was a .30-06 rifle. This was my first experience with a rifle scope.  I soon realized I was right handed but left eye dominant.  That posed a whole new challenge.  I pulled the trigger, and the flood gates opened. I placed the rifle gently on the table and stepped back, trying to not seem like a hot mess in front of my boyfriend’s whole family. I told myself “you can’t be a baby around firearms.”

I left that experience feeling like shooting just wasn’t for me.  My mind kept taking me back to my childhood…the noise was unsettling…. I was frustrated….it just wasn’t for me.  I concluded I would never hit the target, never overcome the association of shots, crime, and sirens, never fit in with the shooting “crowd”.

So… How did I end up at Blackstone? Long story short, I wanted to tackle life and expand my comfort zone. I wanted to conquer my fears, and replace my last firearms encounter with something that made me feel more successful. I believe fear often comes from a lack of understanding. What better place to proactively conquer fear and gain understanding than a gun range!

I found out Blackstone was hiring, so I put in an application. A few days later I received a Facebook message from my sorority advisor from college. She told me she was the office manager at Blackstone and asked if I could come in for an interview.

At this time, I was working as a receptionist at a yoga studio and as a dance teacher. I worked some magic with my schedule and got myself to that interview. My journey began.

The firearms industry can be very intimidating. There’s a lot to know, a social protocol that is set, safety issues and much more. Often times gun ranges aren’t the most welcoming places for new shooters, females, or just anyone in general who doesn’t look like the traditional gun enthusiast.  I am proud to say Blackstone is different in this regard- very different. Of course, I was intimidated my first few days on the job. I wasn’t sure what to expect from all the guys or how I would be treated by customers. It took me awhile to get comfortable holding a gun in my hand.

One of our core values is “Knowledge without Condescension” and I take it to heart. The team takes it to heart. I was, and honestly still am, a new shooter. My team members brought me up to speed without making me feel small, out of place, or incompetent.

I’d be kidding if I told you that I didn’t face certain challenges with being a part of the firearms industry. There are scenarios where the extent of my knowledge is still developing and times that my skills fall short still.  I simply don’t hesitate to say “I apologize, but I don’t have the answer to that. But, luckily for you I know someone who does!” and continue helping our guests. I am not the most skilled shooter, either. It can be a harsh industry, this gunpower atmosphere…

I am proud to be a part of it because I know how women feel walking into ranges, being intimidated. I take it as my personal mission to make them feel as comfortable and welcome. We welcome everyone to come and spend time with us.

Let me say it boldly and loudly… shooting isn’t just for the boys.

I have determined that I want to be that friendly face that makes other ladies feel that they can be badass shooters as well… even if it’s their first time shooting a gun.  I want them to know that is where I was just a very short time ago.

When I think of where I came from, I am proud of where I am now. I never imagined that I would be as knowledgeable about the sport as I now am. Yes, I have a long way to go… but it’s a long way from where I was. I get excited when new female shooters come to the range, unsure of themselves and nervous. Just like me, they want to tackle this challenge.

I give them a selection of guns that I first shot. I give them some simple pointers, which mostly include grip, finger off the trigger until time to shoot, and breathing. I still anticipate my shots, so breathing plays a big role for me. It warms my heart when they come off the range, smiling and thrilled with what they have accomplished. I feel as if I played a big part in creating a significant experience for them.

Another woman who conquered a fear. Another woman who can begin her journey with confidence around a firearm, another woman who could ultimately, defend herself.  My name is Corey B. I am a sales associate and the social media coordinator for Blackstone Shooting Sports, so make sure you say hey and share your own unique experience with me when you come to the range!