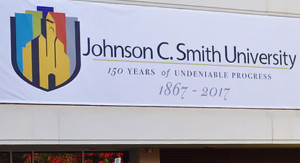 Johnson C. Smith University is recognized as a top 25 HBCU in higher education according to new data released from College Raptor. According to the site, out of the 100s of HBCUs in America, JCSU is one of the strongest institutions of the bunch.

“Since 2015, we’ve carefully assembled our lists each year to highlight the best schools in different categories to help families get started in the discovery process,” said Bill Staib, College Raptor’s CEO. “JCSU has shown dedication to academic excellence. We are proud to highlight them.”

This selection recognizes JCSU as a leading institution in the country based on a combination of factors including the University’s graduation rates, campus diversity, endowment per student, and other key metrics as reported via the National Center for Education Statistics (NCES) for the most recently available enrollment year.

96,886FansLike
35,653FollowersFollow
22,870FollowersFollow
1,540SubscribersSubscribe
Do you have an upcoming event in the Charlotte region that you think should be on our calendar? Click here to let us know about it!