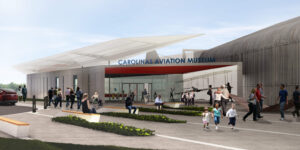 Carolinas Aviation Museum, a Smithsonian affiliate that has served as a hub of community engagement for aviation history and STEM education in the Charlotte region for nearly three decades, today announced a $1.5 million gift from Charlotte-based Honeywell, catalyzing the launch of the public phase of the museum’s largest fundraising effort.

The goal of The Lift-Off Campaign is to raise $22 million in cash investments – plus several million dollars of in-kind support – toward creation of a state-of-the-art STEM innovation center on airport property, with construction expected to begin in early 2022 and a planned opening in 2023.

The reimagined Carolinas Aviation Museum, which will be developed in partnership with Charlotte Douglas International Airport, will house dozens of aircraft and include exhibits such as interactive cockpits, flight simulators, and historic artifacts that chronicle the region’s indelible connection to the wonder of flight and aviation innovation. The new facility will be located at the site of Charlotte Douglas International Airport’s historic WPA/Douglas Airport Hangar, which will be restored as part of the museum project.

“We are extremely grateful for the support from the Airport, the City of Charlotte and the generous investment from Honeywell, and we are ready to lift off on our next phase to create an exciting new facility that matches the innovation we seek to inspire,” said Carolinas Aviation Museum President Stephen Saucier. “We are looking forward to once again connecting in person with the region, contributing to Charlotte’s cultural tourism and economic growth, and providing impactful hands-on learning opportunities in STEM that will help address economic mobility.”

For more information on the campaign and plans for the museum’s new facility, visit carolinasaviation.org.