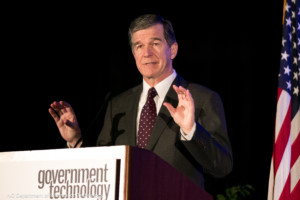 Modern education, health and economic systems require digital technology, Gov. Cooper saidWednesday at the North Carolina Digital Government Summit. However, hundreds of thousands of people in rural North Carolina are being left behind because they lack access to reliable high-speed broadband service.

Gov. Cooper told the audience of more than 400 people that students without internet access at home risk falling behind their peers and that small businesses, farms and manufacturers without service are unable to market their products as effectively as others in the global economy. Better broadband service can also support telemedicine efforts and save rural patients from having to make long commutes for care.

Cooper said he appreciated the hard work in the public and private sectors toward increasing broadband accessibilityand improving cybersecurity.

For the past two years, Gov. Cooper has proposed $20 million in annual spending to improve internet access for underserved communities. The General Assembly ultimately allocated half that amount this fiscal year for broadband expansion, but the governor pledged to continue working to increase funding for the initiative.

“He understands that broadband increases educational opportunities, strengthens our workforce, and improves our economy,” said Eric Boyette, Secretary of NCDIT and State CIO.

Gov. Cooper also reminded the audience of the importance of cybersecurity after attacks earlier this year on government systems in Mecklenburg and Pasquotank counties. North Carolina is one of just four states recently selected by the National Governors Association to participate in a policy academy focused on improving state cybersecurity. DIT Secretary Eric Boyette will help direct the program.

“We have to remain vigilant about cybersecurity,” Cooper said. “It’s one of the things that keeps leaders up at night.”