North Carolina has long been home to legends of Bigfoot, the Lake Norman Monster, and Lizardmen, but recently, there’s been a growing belief of modern pterosaurs living in North Carolina. Pterosaurs were flying reptiles that many scientists believe went extinct a long time ago.

Cryptozoologist Jonathan Whitcomb (author of the books ‘Modern Pterosaurs‘, ‘Searching for Ropens and Finding God‘, and ‘Beat That Kid in Chess‘) recently published an article about the creatures, including new pterodactyl sightings in North Carolina. He commented, “my associates and I believe that these are non-extinct pterosaurs, what many persons would call ‘pterodactyls’ or ‘flying dinosaurs.’”

Cynthia Lee, who has been studying to become a veterinary technician, reported to Whitcomb an apparent pterosaur that she saw on Thursday, January 4, in Raleigh. She was sure that the flying creature had no feathers, but it did have a long tail with a “diamond shaped bulb at the end of the tail.” It also had a head crest.

She also spotted the creature last week following Wednesday’s snow. Lee was taking an Uber ride to work when she saw the same crested creature out the window. The driver did not see it.

Her recent sightings in Raleigh weren’t the first occasions someone in Cynthia’s family had seen an apparent pterosaur. She told Whitcomb about a sighting many years earlier: “My mother and uncle saw one too while they were playing outside of my grandma’s house when they were really little. They told grandma but she didn’t believe it. I thought they were extinct . . .” Since she has seen for herself, however, Cynthia no longer believes that they are all extinct.

North Carolina is considered by many cryptozoologists to be one of America’s 7 pterosaur ‘hot spot’ states; 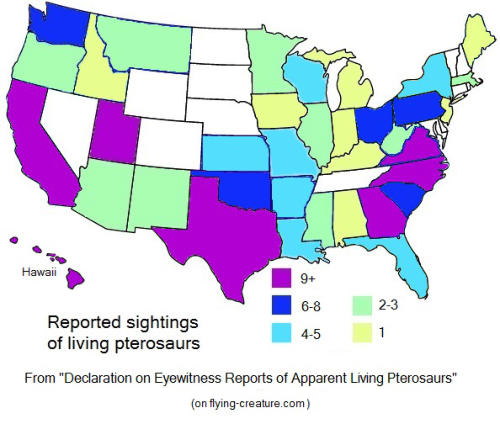 Matt Cartmill, professor emeritus of evolutionary anthropology at Duke University, said that it’s not impossible for there to be living pterosaurs today, but it is highly unlikely.

“I can’t believe that if there were living pterosaurs in North America, three centuries of naturalists, explorers, farmers, hunters, trappers and biologists would never have run across a single specimen, living or dead,” Cartmill told Raleigh’s News and Observer. “I’d rank it as being slightly more probable than living unicorns in Raleigh and Durham. But only slightly.”

Do you think we have living pterosaurs in North Carolina?