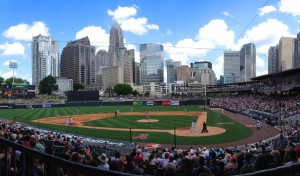 USA Baseball recently announced a new international game between the Cuban National Team and Team USA. Charlotte has been selected as the host city of the game, which will take place next month on the 4th of July.

The exciting day in Uptown Charlotte will also feature the 41st Annual WBT SkyShow, which includes the largest fireworks show in the Southeast. Gates will open at 5:00 p.m. and first pitch of the game is scheduled for 6:05 p.m. at BB&T Ballpark.

“We are ecstatic to host the Cuban National Team for the sixth annual international friendship series in 2017,” said Paul Seiler, Executive Director and CEO of USA Baseball. “Bringing in this level of opponent is special and fans can expect an incredibly high-caliber, hard-played series between two international baseball powers.”

The game will also include a SkyShow Street Party on Mint Street. Live music, games, prizes, and a one-of-a-kind fireworks show headline the annual event.

For tickets or more information about the game click here.