3D Printing Industry Magazine writes, “You would be forgiven for being skeptical of a technology that claims to harness all the benefits of SLA, DLP, and LCD 3D printing in a single machine; however, that is exactly what new start-up AXTRA3D has achieved with its new Hybrid PhotoSynthesis (HPS) technology.”

3D Printing Media Network expresses a similar sentiment: “…Some entirely new polymer AM technologies made their debut at Formnext 2021. Probably the most interesting new product of the entire show was presented by the startup Axtra3D.” 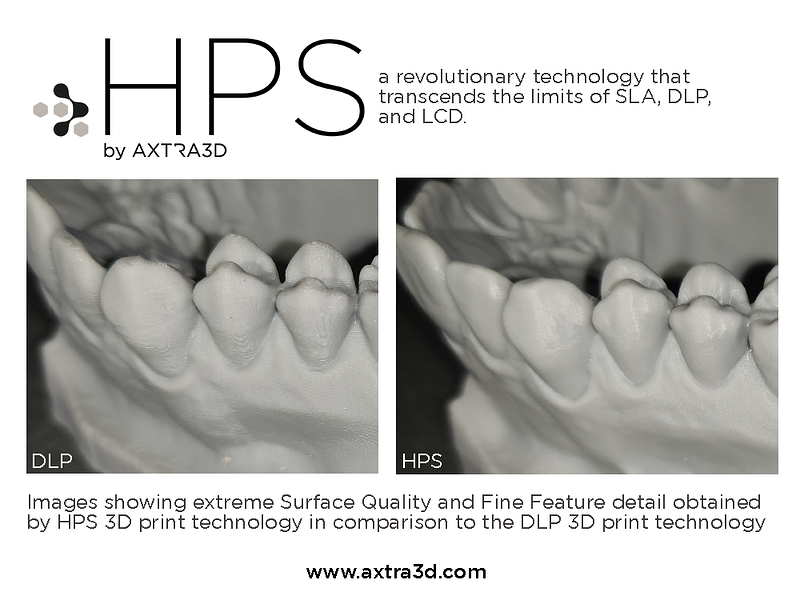 The startup’s new technology combined the following benefits and ended the longstanding need for tradeoffs:

Attendees Greet Technology With Praise
Gianluca Mattaroccial, an Engineering Fellow at The Estée Lauder Companies, received a demonstration of the technology and posted about it on his LinkedIn page, writing, “Printing at the speed of DLP with the surface quality of SLA; this is by far the best breakthrough innovation at formnext2021. Congratulations to the Axtra3D team.”

News about the new HPS technology quickly spread and Axtra3D’s co-founders, Gianni Zitelli and Praveen Tummala, were delighted by the enthusiastic response. “We’ve been quietly developing HPS for a long time. It was great to see the amount of interest and inquiries we received from attendees and media. We truly believe HPS has the power to transform 3D printing and our experience at Formnext confirms that this technology is an industry game-changer,” states Axtra3D CEO, Gianni Zitelli.

According to TCT Magazine, “Axtra3D combines benefits of SLA, DLP and LCD 3D printing with new Hybrid Photosynthesis technology…. Bringing together the benefits of each of those resin-based 3D printing techniques, the Lumia promises a large build area, continuous printing, high-resolution, speed and surface quality, and isotropic part performance. This marriage of processes means part layers are cured via a projector while at the same time, the part edges are cured with a laser.”

Axtra3D’s innovative HPS Technology is poised to revolutionize Additive Manufacturing and 3D printing— and the industry’s strong and positive response is a clear indicator.