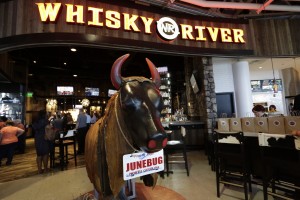 USA Today joined forces with Airport Restaurant News and 10best.com to ask people all across America what Airport bar they thought was the best. Some speculate that because Whisky River is owned by Dale Earnhard Jr., that his massive fan base was the reason for Whisky River’s victory.

A spokesman for the company even commented, “It’s an online vote, and we were fifth in the voting before they even told us about it, I told Dale about it at 10 a.m., and by noon, we were first. We never really lost the lead from then on.”

Even if the massive JR fan base was the main reason for the win, the bar itself is actually quite impressive for being an airport bar. It features a full-sized model bull and even a stage for live performances. The menu includes favorites like the Carolina Q Burger, chipotle queso and Dale Jr.’s signature barbecue sauce. Cocktails made with Midnight Moon Original Moonshine (from legendary racer and whisky maven Junior Johnson) can also be seen on the menu.

Since winning the award back in March, the bar has continued to impress visitors to our airport and brings a friendly feel to epicenter patrons traveling out of town.

Have you had the chance to check out their new airport location? Do you think they deserve the top spot in America?