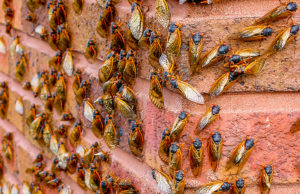 Just when you thought 2020 couldn’t get any worse, one of the largest broods of giant cicadas will soon emerge from the ground after a 17-year slumber.

According to Magicicada.org, the 17-year periodical cicada Brood IX will emerge in North Carolina, Virginia, and West Virginia. It’s estimated that over 1 million creatures per acre will swarm our states beginning in late May and Early June (meaning Brood IX’s total numbers will likely reach several billion).

The flying insects spend most of their lives underground, in an immature “nymph” state, hibernating and slowly nibbling at plant roots with soil temperature and year synchronizing their transition to a ready-to-emerge mature cicada, ready to emerge, breed and lay eggs.

Once they hatch, they will flood the airwaves with a loud drone chirping sound that they use to find mates, after mating and laying their eggs, they will die withing a couple weeks.

96,542FansLike
35,653FollowersFollow
23,030FollowersFollow
1,540SubscribersSubscribe
Do you have an upcoming event in the Charlotte region that you think should be on our calendar? Click here to let us know about it!