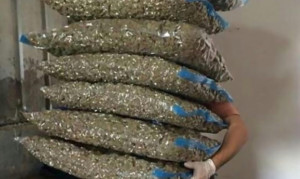 In the small town of Simpson, NC a man is now on the run for drug trafficking after police discovered over 3,000 lbs (1.5 tons) of marijuana in his storage facility.

This past Tuesday, police stopped 38-year-old Vo Thien Ozen during a routine traffic stop. He was given a citation and released when police found drug paraphernalia inside his car, but no drugs, according to The Daily Reflector.

“At 6 p.m. after further investigation, deputies went to 2843 Unit A, Edwards Drive in Simpson, which is a small commercial area across the railroad tracks from the Simpson Fire Department. The location was a kitchen equipment business owned by Ozen.”

The drugs and cash were found inside a fairly basic-looking storage facility, according to WNCN.