Walmart just made another major purchase in the Charlotte market in its continued war against Amazon for consumer distribution and delivery supremacy.

According to Iredell County records, the retail giant just purchased a sprawling 1 million sq ft industrial building near I-77 in Troutman for $69 million. 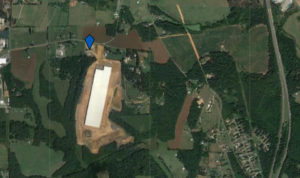 Troutman Industrial Park includes just over 158 acres of land located at 386 Murdock Rd., Troutman, NC, just west of I-77. Construction on the facility was completed this year and ranked among the largest industrial complexes in the Charlotte region (soon to be dwarfed by Lowell’s 3.2 million sq ft industrial facility).

According to the deed, the new purchaser is Walmart Fulfillment Services LLC, indicating that Walmart will be using the facility, in large part, for fulfilling online orders in direct competition to online retail giant Amazon.

What do you think about Walmart’s growing presence in the Charlotte region?