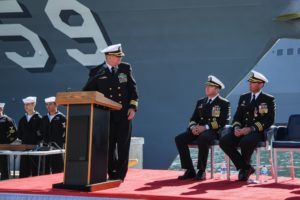 “It has been an honor and privilege to serve with the Sailors and Officers aboard Russell, and I am extremely humbled and proud of their accomplishments,” said Foster. “This has been my most rewarding tour. I am confident Commander Rogers will continue the valued traditions and operational excellence of USS Russell.”

Rogers assumed command of Russell in accordance with the Navy’s Fleet-up Program after serving as Russell’s executive officer.

“It is a great honor to have the opportunity to lead the outstanding Officers and Crew of Russell,” said Rogers.