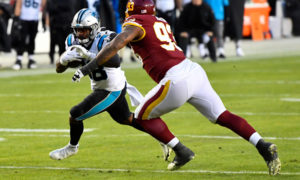 The NFL is one of the world’s biggest sporting franchises and is known all over the world as America’s favorite sporting league. However, outside of America, many people don’t know much about the other Football league in the country. One that feeds into the NFL and in many states is more popular than it.

We are, of course, talking about College football.

College football is a large league (NCAA) made up of 130 teams fielded by colleges, universities, and academies.

The NFL is a professional football league, followed by millions across the world. There are 32 teams based all around the country that compete for the SuperBowl Trophy.

In this article, we are going to cover what both leagues are and the main differences between them.

A guide to College Football

College football is a football league made up of teams fielded by American and Canadian Universities, as well as American Military academies.

NCAA Football Division 1 is the official name of the College football league. In this league, there are 130 teams. These teams are split into 12 different conferences.

There is only one playoff in College football, so the winners of the big tournaments are often very easy to predict.

There is some betting on College football, but it is not as popular as NFL Betting.

The NFL Draft takes place in the off-season each year. It is a process where NFL teams select amateur and semi-professional players to join their camps. The draft is made up of 7 rounds.

The Draft was designed to boost the competitive parity in the NFL. The team that did the worst in the previous season gets to pick first. Theoretically, this allows the worst team to pick the best players. While the top picks are usually the best player, some break the mold. Tom Brady was picked 199th in his draft.

Any player that has been out of high school for at least 3 years is eligible for draft selection. They do not have to be a senior in college, but this is most common.

A team can be forced to forfeit picks if they have violated NFL rules during the previous season. The most recent example of this is the New Orleans Saints who were punished for violating COVID-19 guidelines repeatedly during the 2020 season.

A Guide to the NFL

The NFL is by far the most watched sporting league in America. With millions of people tuning in to watch every match. The league is made up of 32 teams. It is the only professional football league in America.

The league was started in 1920 and in 1966 they merged with their only rival – the AFL – to make one large league. They have been holding Superbowl competitions for the last 55 years.

Here is a list of the major rule differences between the NFL and College football: