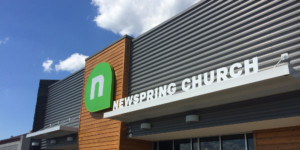 NewSpring Church has just launched their first York County campus in Rock Hill. The church recently went through a tragic period with the removal of their founding pastor due to alcoholism, but has shown surprising resilience to rebound back.

NewSpring Church is the largest single church in South Carolina and was recently ranked as the #2 fastest growing church in America. According to their 2015 annual report, the church received $64,297,130 in donations last year from over 32,000 weekly attenders at 17 campuses across South Carolina.

The campus pastor of the newly formed NewSpring Rock Hill is Kaleb White, who was a youth group worship leader at the mega church before achieving the position of campus pastor. Kaleb now lives in Rock Hill with his wife Kristen, his son Levi, and dog Lilly.

First week at @newspring Rock Hill campus and I am so grateful for a church with so many locations!!#CommunityIsKey pic.twitter.com/jKqVa3CQzr