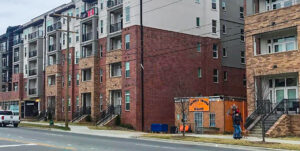 Rolling Stones front man Mick Jagger was spotted last night at of of Charlotte’s most legendary and unique bars – the Thirsty Beaver Saloon.

The dive-bar has become nationally famous for refusing to sell out to developers and now being almost comically surrounded by towering apartment complexes (it’s even been ranked the #1 dive bar in North Carolina).

This morning, Mick Jagger posted a photo while drinking a beer just outside of Plaza Midwood Saloon with the caption, “Out and about last night in Charlotte, NC”.

Out and about last night in Charlotte, NC pic.twitter.com/BWssvivAII

Jagger was last seen performing on stage in St. Louis this past Sunday, a performance he will be repeating live in Charlotte tonight for what will likely become his last Carolina concert of his career.

Thanks St. Louis for a great night! pic.twitter.com/eQauxqXsla

You can still buy tickets to tonight’s Rolling Stones Concert at the Bank of America Stadium here.