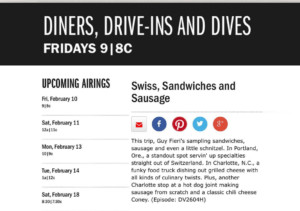 In a little over a week, one of Charlotte’s favorite food truck and one of our best hot dog restaurants will both be featured on The Food Network.

We reported on the filming of Diners, Drive-ins, and Dives when they were spotted at Charlotte’s Papi Queso and JJ Red Hots this past December, and in just over a week, that episode will be aired.

According to the Food Network’s website, next Friday’s episode will feature, “a funky food truck dishing out grilled cheese with all kinds of culinary twists. Plus, another Charlotte stop at a hot dog joint making sausage from scratch and a classic chili cheese Coney.”

JJ Red Hots and Papi Queso were selected after a large number of fans wrote the show to nominate them.

The popular show, which highlights local restaurant favorites around the country, has already been to Charlotte numerous other times, including stops at; BarBQ King on Wilkinson Boulevard, Cabo Fish Taco in NoDa, Dish in Plaza-Midwood, Jake’s Good Eats on Albemarle Road, Landmark Diner on Central Avenue, Dilworth’s 300 East, and South 21 Drive-in on Independence Boulevard.

No wonder Charlotte was just ranked as the #9 food city in America by Zagat Restaurant.

Don’t miss the Queen City’s own Papi Queso and JJ Red Hots next week, on Friday, Feb. 10th on the Food Network’s Diners, Drive-ins, and Dives. 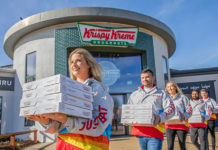 Top 10 Most Romantic Restaurants in Charlotte