A bi-partisan sponsored bill now making its way through North Carolina legislature would require our public schools to teach students about the Holocaust.

Yesterday, North Carolina’s House Education Committee pushed through a bill that would require the State Board of Education to include information about the Holocaust into English and social studies curriculum for middle and high school students.

The bill reads, “The General Assembly finds that knowledge of the Holocaust is essential to provide students with the fundamental understanding of geography, history, and political systems necessary to make informed choices on issues that affect individuals, communities, states, and nations.”

HB 437 is being named the “Gizella Abramson Holocaust Education Act” after a Holocaust survivor who moved to Raleigh as a child.

Before dying in 2011, Abramson spent the majority of her later years sharing her experiences in schools around our state.

Greensboro’s News and Record reported on one of Abramson’s lectures back in 2000. She recounted the memory of a little girl she met at a concentration camp train station. 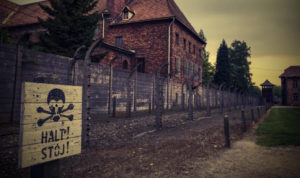 “‘My name is Anya and my father’s name is Boris and my mother’s name is Galena,'” Abramson said. “Over and over until it made me want to scream because I’d just lost a friend to the gallows between the barracks. I didn’t want to acknowledge her because I was so tired of caring about people when I’d only lose them.”

Years later, Abramson finally realized what little Anya was trying to do.

“She hoped that if one of us survived, they would remember her. That she lived and walked on the ground just like you do. She was taken away to the gas chambers with the old and the ill.”

“Today I remember Anya as a girl who lived and breathed and only wanted to be acknowledged as a real person, and I hope that you will begin to do this for her, too. She lived.”

There are currently 20 other states that require the Holocaust to be taught in classrooms.

What do you think about making the Holocaust a required topic?