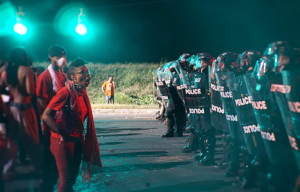 A new bill has passed the NC House that would allow North Carolina drivers to drive through protesters who are blocking the road without being sued, as long as they “exercise due care.”

It was introduced by Republican Justin Burr and “provides that a person driving an automobile while exercising due care is immune for civil liability for any injury to another if the injured person was participating in a demonstration or protest and blocking traffic.”

“As we’ve seen, time and time again, as folks run out in the middle of the streets and the interstates in Charlotte and attempt to block traffic,” Burr said. The Republican commented that he wants to ensure that “drivers don’t have to fear driving through Charlotte or anywhere in North Carolina.”

“This bill does not allow for the driver of a vehicle to target protesters intentionally,” he added. “It does protect individuals who are rightfully trying to drive down the road.”

Charlotte saw a number of roads blocked after the death of Keith Lamont Scott and the protests that followed last year. During the second night of the protests, rioting erupted in Uptown Charlotte, with one person being shot and killed.

Here’s some footage from the rioting last year:

The bill is now heading to the NC Senate for final approval.