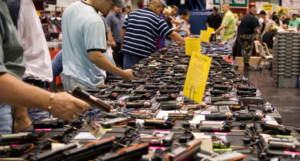 Exactly one month after the deadly shooting at a Florida high school, and the same day thousands of students across the country walked out of school in protest, NC Governor Roy Cooper released a new memo calling increased gun regulations across the board.

In the memo, the governor outlined four specific areas he will be working toward changing;

“Until the federal government takes action to discontinue the sale of assault weapons to civilians, North Carolina law should be updated to raise the legal age of sale of these weapons to age 21 and require anyone buying them — at a store, online, or at a gun show — to go through the same background check and permitting process as they would for a handgun.”

“To ensure that we are doing our part to make background checks more effective, I’ve directed the State Bureau of Investigation to undertake a comprehensive inventory of the quality of information our state shares with the federal background check system.”

“Right now, it appears as though the federal government is moving to ban so-called ‘bump stocks.’ If that effort falls through, we should take action in North Carolina to ban these devices, which turn semi-automatic guns into machine guns.”

“Finally, it is clear that there needs to be better diagnosis and treatment of people with mental illness, especially those who might turn violent…We can also increase the number of school personnel who receive youth and adult mental health first aid training…”

Governor Cooper closed his memo by saying, “The steps I’ve outlined here are meaningful, common sense changes that we can make to better protect our children and our communities. We can’t wait for Washington to act this time. The safety and security of our kids are on the line, and I urge the General Assembly to join me in taking decisive action to do right by them.”

What are your thoughts on the plan?