Over the past several years, coyote sightings have been increasing around South Charlotte neighborhoods, with reports of pets being snatched, and many parents fearing for their children’s safety. 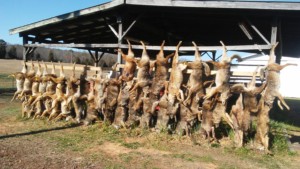 Local sportsman and owner of 704Outdoors.tv thinks he has the best solution to the problem – a statewide coyote tournament. Next month he will be organizing the 7th annual Carolina Coyote Classic tournament.

The tournament will take place from February 21st-23rd and will be held at the American Legion Post 76 (Formally Stanly County Fairgrounds) located at 24302 S Business 52 in Albemarle, NC. It is open to all 100 counties around North Carolina.

To find out more or to register click here.