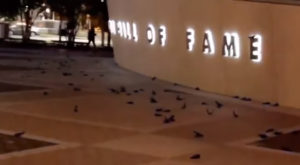 As the Hunter Moon loomed over the Queen City, a horrific scene unfolded at the Nascar Hall of Fame when hundreds of birds flew full-speed into the side of the building.

One Charlotte resident started recording on their cell phone after they noticed the birds flying into the windows;

Carolina Waterfowl Rescue was called and they arrived on scene at roughly 11pm.

The organization said that out of the 310 birds that were found, roughly 1/3 were dead when the arrived, 1/3 had broken legs or other serious issues, and 1/3 were simply stunned and would be released into the wild shortly.

At this time, its unknown why the birds suddenly flew into the side of the building.

According to the Cornell Lab of Ornithology, “Up to about 1 billion birds die from window strikes in the U.S. each year.”

The lab recommends the following tips to homeowners who want to avoid tragic bird collisions;