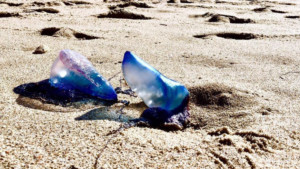 The most beautiful, and the most deadly jellyfish in the world is now washing up onto Carolina beaches in droves, and many are discovering first hand that the creatures are just as dangerous dead as they are alive

“Portuguese man o’ wars all along the coast yesterday. On every beach I hit up from North Topsail to Indian Beach, to Fort Macon and Emerald Isle,” according to one Facebook post.

An Oak Island beachgoer also posted another, reading, “They were all over the beach today, I saw several. They will hurt you!”

The Portuguese man o’ war is a marine cnidarian of the family Physaliidae. They differ slightly from a traditional jellyfish in that they are a colony of organisms living in symbiotic harmony, as opposed to most jellyfish, which are 1 organism. Their name comes from their resemblance to 18th-century Portuguese warships, and because of their deadly stings.

The Portuguese Man o’ War is one of the most dangerous jellyfish in the world with 100ft long tentacles. No deaths have been recorded yet. pic.twitter.com/REn7zYTE9E

According to National Geographic, “The tentacles contain batteries of cells that house miniscule, hollow harpoons called nematocysts. Those barbed harpoons act like hypodermic needles, enabling the man-of-war to inject a potent mix of venom into a victim.

If you’re planning on visiting a Carolina beach over the next few weeks, officials are now advising beachgoers to carry jellyfish sting ointment with them in case of stings.

If you spot a Man ‘O War jellyfish, please contact the lifeguard or local police.