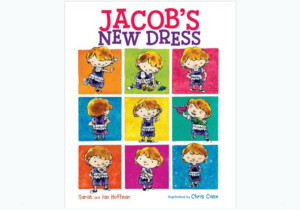 After an uproar from parents, teachers, and Republican politicians, the Charlotte-Mecklenburg School system just decided to remove “Jacob’s New Dress,” a book about a boy who dresses like a girl, from required lesson plans in four Charlotte elementary schools.

The book was originally selected as part of CMS’s ‘anti-bullying program‘, a new program aimed at increasing acceptance through teaching elementary students about gender expression and gender fluidity.

Yesterday afternoon, Charles Jeter, CMS’s government liaison, sent a letter out to Republican legislators saying that CMS has now agreed to substitute “Jacob’s New Dress” with “Red: A Crayon’s Story” – a story about a crayon that looks red but sees himself as blue.

Parents and teachers began voicing their opposition as soon as they learned about the new “Jacob’s New Dress” lesson plans last week, many stating that sexuality and gender identity should not be taught by schools.

So Done! We took care of Jacob’s New Dress. Now we’ve got confused crayons running around not sure what color they are.

State Republican leaders and watchdog groups also voiced their opposition upon learning about the new book.

“The purpose of our elementary schools is to teach writing, reading and arithmetic, not to encourage boys to wear dresses. These lessons found in the ‘Jacob’s New Dress’ and ‘My Princess Boy’ and other transgender curriculum are not appropriate for any child whose parents support traditional family values,” commented Tami Fitzgerald of the North Carolina Values Coalition in yesterday’s press release.

This past August, CMS came under fire after it started using the “Gender Unicorn” in its training material about gender identity. The Values Coalition stood up to the school board at their meeting meeting and flooded board members with emails, phone calls, and letters, telling them that the new program forced kids to support gender flexibility.

The CMS school board also recently added sexual orientation and “gender identity/expression” to its policy on multiculturalism. The new policy now requires CMS to “intentionally incorporate diversity throughout the curriculum, instruction and professional development.”

Superintendent Ann Clark has still not responded for comment on the ‘Jacob’s New Dress’ lesson plans, or about them adding sexual identity to the school system’s multicultural policies.

What do you think about CMS’s recent actions regarding gender identity?