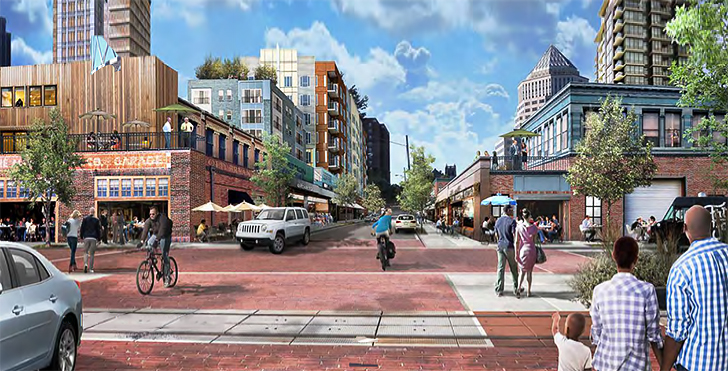 The Charlotte City Council has just voted unanimously to approve a new $600 million plan to completely redevelop most of the area between Tryon and College, from Sixth to Eighth Streets, aka The North Tryon Vision Plan.

The hope is that the redevelopment would cause a sort of ‘catalyst effect’ around the area and would attract new developers to continue the growth.

One of the most prominent features for pedestrians and bikers is being called the ‘Play Street Concept’ (pictured above), according to the new plan, “The Play Street concept builds on the success of the anchor institutions which attract thousands of families to North Tryon each year. The immersive and interactive experience in both the design of the street and adjacent development will characterize the experience of walking along 7th Street.”

The plan also calls for at least 5 major renovations of Charlotte institutions around the N. Tryon Uptown corridor, including; The library will completely redeveloped with a possible mid-rise to high-rise built on top of it. The new facade will be in line with the aesthetics of the new Spirit Square.

The main changes that are proposed to the Discovery Place will be a totally transformed outer facade (seen above), as well as new artistic and scientific outdoor landscaping and features for pedestrians and visitors to play with and on. The proposed redevelopment of the Hall House block includes a totally new mixed-use development in partnership with Bank of America, to include both low-rise and mid-rise office, residential, retail and cultural facilities.

#5 The Levine Museum of the New South The proposed Levine Museum of the New South at the corner of College and 7th Streets would include an expansion of up to 10,000 square feet, and a redesigned interior and exterior design to target more youth and young adults.

According to the city, the economic development impact of this project would include:

What do you think about the plan?