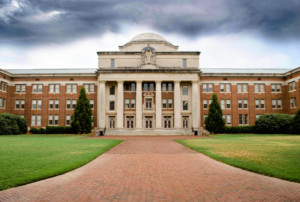 According to Forbes’ best colleges and universities in America, one Charlotte-area school has been ranked among the likes of Stanford, Yale, and Harvard University.

Davidson College was named the best school in the south and the 25th best college in America – narrowly losing to Boston College (#22), Georgetown University (#21), and The University of Chicago (#20).

To compile the list, Forbes partnered with the Center for College Affordability and Productivity to help analyze data from from the Department of Education, Payscale, and the America’s Leaders list.

Davidson College has also been ranked the #9 liberal arts college by US World & World Report, and #26 by Washington Monthly.

The school has a true history of greatness, having produced 23 Rhodes Scholars, four governors, and two-time NBA MVP Steph Curry.