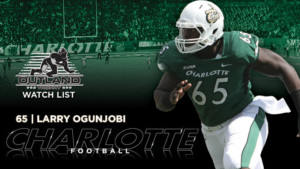 Struggles On Offense Continue As 49ers Fall To 4-4

On Saturday, the 49ers visited the Western Kentucky Hilltoppers, who were coming off their second straight win.

It was the Hilltoppers who sustained their momentum, crushing Charlotte 45-13. The result placed both teams at 4-4 through eight games.

After going down 21-3 in the second quarter, the 49ers showed some life by responding with 10 unanswered points. But Bailey Zappe tossed a late touchdown to Jerreth Sterns to close out the half, and the Hilltoppers took control from there.

This also marked the second consecutive game in which the 49ers were shut out in the second half, per the school’s official website. Charlotte squad mustered just nine points in the team’s 38-9 blowout loss at home to Florida Atlantic on Oct. 21.

In all four of their losses, the 49ers have scored no more than 14 points, and they’ve been held to single digits in two of them.

Charlotte will look to rebound when they host Rice (3:30 p.m. EST) this Saturday.

For 49ers fans interested in sports betting, Charlotte opens as a six-point favorite against the Owls.

Reynolds suffered a hand injury on his right throwing hand in Charlotte’s game against Florida Atlantic, which kept him sidelined for the contest against Western Kentucky.

Per Hunter Bailey of The Charlotte Observer, 49ers head coach Will Healy said that Reynolds will remain day-to-day through next week. His status for the pivotal contest against Rice is unclear.

The guy is a fighter. Hand injury feeling good too he says.

Reynolds has 1,533 passing yards, 16 touchdowns and five interceptions to go along with 207 rushing yards and three rushing scores.

To say that the 49ers hit a home run with the hiring of Healy — in his third year on the job — would be quite the understatement.

In his first year with the Charlotte football program, Healy led the team to a 7-6 record. They advanced all the way to the Bahamas Bowl, falling 31-9 to the Buffalo Bulls. The 49ers went 2-4 in 2020, a season that was cut short because of the COVID-19 pandemic.

In a recent piece, ESPN’s Adam Rittenberg detailed how some college football coaches have flourished by implementing the “Ted Lasso” effect.

The AppleTV+ primetime hit stars Jason Sudeikis as the main character. Sudeikis plays an American college football coach who is tasked with turning around the fictional AFC Richmond soccer team in the Premier League.

In the piece by Rittenberg, Healy talked about his approach to coaching, citing some of the Ted Lasso character qualities:

“I’m not going to try and go be (Alabama head coach) Nick Saban,” Healy said. “He’s better than I am, he’s won more games, he knows more football. I have so much respect for that, but it’s not my personality. It’s the same thing with recruiting a player… I grew up on the lake. That is me, and I’m not going to try to be somebody else.

“I tell guys, ‘There may be some of these things that I don’t understand because I haven’t lived that experience, but I care enough about you to want to understand more, and be there for you consistently.'”

49ers Look To Rebound vs. Rice

The 49ers enter must-win territory as they prepare to host the Owls, who have won three of their last five contests following an 0-3 start.

If there was ever a golden opportunity for the 49ers to regain their form on offense, this is it. The Owls have one of the worst defenses in the country, allowing a whopping 36.5 points per game.

On the other side of the ball, Rice is averaging a mere 18.8 points per game. Their quarterbacks have combined for only 10 touchdown passes against nine interceptions.

With home advantage and a reeling Rice team next on the schedule, the 49ers simply cannot let this opportunity get away. Even if Reynolds misses his second straight game, the chance is right there for Foster to lead his team to victory.

The Owls have been solid against the pass, allowing an average of 228.6 yards per game. However, the 49ers RB duo of Calvin Camp and Shadrick Byrd should have a field day against a defense that’s allowing 193.5 yards on the ground per game.

If Charlotte’s leaky rush defense (203.6 yards allowed per contest) can contain Rice’s ground game, they should cruise to a much-needed victory.