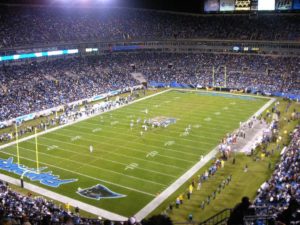 Although the season has been up and down for the Carolina Panthers, Brian Burns has shown that his stellar performance on defense gives promise to the future of the roster. Last year, the Carolina Panthers chose Burns in the first round of the draft, and he showed promise at the time. His sacking skills shone with 7.5 sacks in his rookie season in a rotational role, but he has shown himself to be a star across the board.

Off to a Great Start

After working hard in the off season, fans can see the results. Burns committed himself to improving and becoming a defensive end who could perform across the board, and the results are exciting. He has had the sacks fans expect, and he is consistent and quick in going after the quarterback. He has the potential to become even more of a phenomenon.

It seems as though Burns has been around much longer than he has, as he is only in his second season now. As a college star at Florida State, Burns racked up 23 sacks and 38.5 tackles for loss, and he continues his march forward in the NFL without hesitation. In spite of his efforts, the Panthers need to beef up the team around him. As it stands, he is the one making everything happen.

For one, Carolina needs to add a defensive tackle to play next to Derrick Brown and go after the passer. This player can also help the injured Yetur Gross-Matos become a more imposing threat across the line once he recovers from his high ankle sprain. Burns is clearly a force, as evidenced by his performance, but Carolina should bring in some players to help him out next season, which would increase the odds put up by Online Gambling NJ.

It isn’t difficult to see Burns’ potential in this sport. In the first nine weeks of this season, he had 22 pressures, and he had 23 in all of last season. In fact, pro-Focus Football grades him an 85. In addition, his snap count is 75%, which is significantly higher than the 43% he had as a rookie last season. He continues to impress and develop as an all around great defensive end, possibly one of the best in the league.

In fact, in the 20 – 0 shutout of Detroit last Sunday, Burns was all over the defensive line. The Panthers lined up ready to blitz and bailed out over and over again, leaving Detroit scrambling to figure out what they were going to do. On Burns’ last sac, they didn’t even find him when the play started. This game was worth getting excited about as a preview of the future.

The Panthers 3 – 6 record is not terribly surprising, as they are going through a transition period with a young and inexperienced roster. Their record doesn’t tell the entire story, as they have been competitive in most of their games. They need to learn how to come through at key moments, which comes with player experience.

The Panthers have a solid foundation that they can build on, and they should consider complementing the talents of Burns and beefing up their defense. Carolina could be a contender in the near future if they make the right moves.

Brian Burns has taken the NFL by storm, and he stands to be a force going forward. Although the Carolina Panthers are in a time of rebuilding the team, they have a promising future if they make the right moves during the off-season. Burns has shown himself to be more well-rounded this season, and his hard work off the field is paying off. If Carolina can find a few players to back him up, they might find themselves with more in the win column.

Keep an eye on Burns for the rest of the season, as he only seems to get better. In this season, Burns has shown that he can do more than sack, but his sacks have proven to be more than a one season deal. He has transitioned from college to the NFL seamlessly and looks to be the real deal.