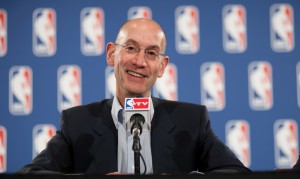 The NBA is now threatening to move the 2017 All Star Games out of Charlotte if the new HB2 legislation is not repealed. The HB2 law was initially passed on March 23rd in response to Charlotte’s new ‘bathroom bill’ and LGBT non-discrimination class additions.

“With this new law in place, Charlotte currently does not have any anti-discrimination protection in place, something that would be vital for a large event such as the All-Star Game. We are giving the state of North Carolina 30 days to repeal this law or they can expect the 2017 All-Star game to be held elsewhere. I want to make it clear that the NBA will not stand for this type of intolerance and hate.” NBA commissioner Adam Silver told reporters in a news conference today. ”

Atlanta’s City Council introduced a resolution at a meeting asking the NBA to consider Atlanta after NC legislature signed HB2. A move to Atlanta seems unlikely considering that Georgia does not currently have any more LGBT protections than North Carolina now does.

North Carolina’s new HB2 law prevents Charlotte and other local governments from passing any LGBT ordinances that conflict with current state laws. North Carolina’s Republican-led Legislature said Charlotte city leaders went too far with a local anti-discrimination ordinance that, among other things, would have allowed men and women to public restrooms, locker rooms, and shower facilities of any sex they chose.

After Atlanta’s resolution to the NBA this past week, NC Governor McRory responded back by saying that North Carolina isn’t the only state to pursue such legislation.

“Thankfully no college team from Georgia made the Final Four again this year. Otherwise, the Atlanta City Council would have to boycott the City of Houston where voters overwhelmingly rejected a bathroom ordinance that was nearly identical to the one rejected by State of North Carolina,” said an emailed statement from McRory communications director Josh Ellis.

What do you think about the new HB2 law?