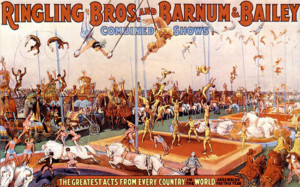 After almost 150 years of touring, the Ringling Bros. and Barnum & Bailey Circus recently announced that it will be shutting down “The Greatest Show On Earth.”

The historic American spectacle will now perform a limited number of final performances in select cities, says Kenneth Feld, the chairman and CEO of Feld Entertainment, the producer of Ringling.

Their website states that they will be shutting down due to declining ticket sales “This, coupled with high operating costs, made the circus an unsustainable business for the company,” Feld commented.

The Ringling Bros. and Barnum & Bailey® Circus decided to host one of their final series of shows in the Queen City next month.

Their ‘Out Of This World’ show will feature never-before-seen additions, including a full ice rink and Olympic-class gymnast routines.

It will be themed as an intergalactic adventure, with the audience joining the performers on a space quest of good versus evil that will include gravity-defying acrobats, orbital aerialists, deadly animals, daredevils stunts, and tons of clowns.

Here’s the promo video they just released for the show:

It will be hosted the Spectrum Center from February 1st through the 5th with show times starting at 11am, 3pm, and 7pm.

Tickets are now starting at $28 each. For more info or to buy tickets click here.

Their final performance will be on May 21st at the Nassau Veterans Memorial Coliseum in Uniondale, N.Y.