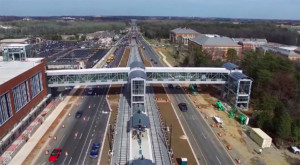 As Charlotte’s explosive growth continues, our traditional growth pattern – low-density and heavily auto-centric — is not sustainable for the generations who will live and work here in the years ahead and has made living here difficult for many today.

Facing similar challenges, other fast-growing cities such as Austin, Seattle, and Denver are making ambitious investments to build diverse mobility networks. Unfortunately, Charlotte’s response has been lackluster. Our bus system is ranked among the poorest in the nation, rail transit expansion has been sporadic, and safe bicycle and pedestrian networks are rare.

Expeditious development of the Transformational Mobility Network (TMN) – with interconnected mobility options to serve everyone – is essential to a strong and sustainable future for the Charlotte area.

A report from the local nonprofit group Sustain Charlotte has detailed what we can do as a city to utilize our full potential. They note that some positive steps from the TMN include:

But they say that other aspects of the proposal are concerning, including:

They believe that the best next steps include:

Building the full Transformational Mobility Network, on an expedited schedule, is essential to securing Charlotte’s position as a top-tier city.