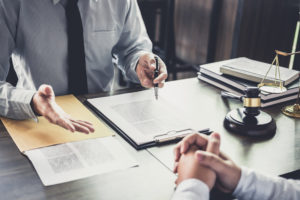 We often hear the term negligence used somewhat loosely in fairly casual scenarios, but it’s also an important legal term. Negligence is one of the underlying factors that have to be present in a personal injury case, for example. There’s also a similar concept that can affect a personal injury claim called negligence per se.

The following is a guide to what negligence and also negligence per se mean in a legal sense.

One of the most common types of lawsuits in personal injury involves negligence claims. Negligence is a situation where someone acts carelessly. Carelessness is the element of negligence, and that results in another person getting hurt and/or property being damaged.

Negligence is a tough area of law to define since it involves a legal analysis of the elements of the concept as they relate to the facts of a specific case.

People are required to act in a way that meets certain standards of conduct. If a person behaves in a way that’s in violation of those standards, the law requires them to compensate someone who is hurt as a result.

The law of negligence in certain situations might also include a person’s omission of action or basically their failure to act.

In tort law, negligence is a cause of action.

Tort law defines negligence as conduct below the standard set by the law for the protection of others against an unreasonable risk of harm.

In a lawsuit claiming negligence, a plaintiff who is the person who was harmed has to show that five elements existed. These elements include:

There are a lot of situations in our everyday lives where duty arises, even if you don’t realize it. For example, when you’re driving a car, you owe a duty to other pedestrians and drivers to follow the rules of the roadway.

Some state laws or statutes define specific duties. Some professions have outlined specific duties, such as doctors or lawyers. If a professional doesn’t uphold a standard of care, they could be liable for malpractice. Malpractice is a tort with a basis in the law of negligence.

If you act or don’t act in a way causing harm to another person, that’s an example of you being negligent. Accidents happen, though, and no one is perfect.

The standard of care is what separates an accident from a negligent act.

If you neglect to follow the proper standard of care given a situation, then you could be liable for the injuries that resulted.

Juries can decide if a defendant behaved as a reasonable person would have, as well as look at the other elements of a negligence case.

What Is Negligence Per Se?

In an ordinary case of negligence, the plaintiff has to prove negligence. The burden is on a plaintiff to show the behavior of the defendant was less than the applicable standard of care and that the actions were the actual, proximate cause of the harm.

In many states, though, if a defendant violates some type of regulation or statute and someone is hurt, negligence is inferred.

There’s a standard permitting the inference called negligence per se. The doctrine then makes it easier for victims to recover from damages, but how it’s applied varies depending on the state.

The jury does still have to consider and determine whether the behavior violated the statute and caused the accident, but there’s an assumption of standard of care.

As an example, if a defendant is convicted of a DUI, it’s a crime. Evidence of the conviction might be court-admissible, which can make it easier to apply negligence per se.

For negligence per se to apply, it can only be in a situation where the broken regulation or statute is meant to protect the class of people the plaintiff belongs to.

If someone is texting and they run a stop sign, hitting a pedestrian. As a pedestrian, you are part of a protected class of people. The traffic laws are put into place to protect you. The driver who was texting and running a stop sign is also breaking state traffic laws. Then, the duty of care breach is inferred based on the conduct of the driver.

The plaintiff in this situation would only need to show the actions of the defendant directly caused their injuries.

There are states with variations on negligence per se too.

As you might guess, this all gets very complicated, which is why anyone who’s hurt in an accident or incurs damages is probably best off talking to a personal injury attorney. They can help you understand more about your situation in relation to laws in your state.

Laws get complex, and situations can vary so significantly that there’s no consistent way to determine how your case might work out without talking to a lawyer.