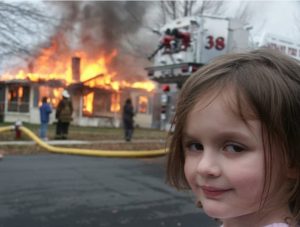 The subject of one of the most famous internet memes of all time just sold her original photo as a digital NFT for an astounding $481,000.

21-year-old UNC Chapel Hill senior Zoe Roth was just 4 years old when her photo was taken in front of a burning building in Mebane, North Carolina. Now called the ‘disaster girl meme’, the photo was uploaded to the internet in January of 2005 and quickly spread across millions of profiles on Myspace.

Here’s a quick video from 2011 that tells a brief history of the meme:

This past February, Zoe and her dad (the photographer of the legendary image) received an email about turning the image into a non-fungible token (NFT). After considerable research, they hired a manager and a lawyer to help create the NFT and sell it in an online auction.