The economy of the United States and North Carolina continues to accelerate, yet international trade could be entering a caution zone, UNC Charlotte professor and economist John Connaughton says.

During the Barings/UNC Charlotte Economic Forecast today, Connaughton emphasized the country is in the second-longest economic expansion since 1854. This economic expansion has been under way for 111 months, as of September 2018.

Connaughton said that U.S.trade policy, however, is experiencing changes that could impact the economy – though it’s too soon to tell. “The United States has very few formal trade agreements with other countries, which means that tariffs abound on U.S. products with many countries,” he said. “It’s too soon to know if any changes to trade arrangements will have an economic effect.”

In his economic update, Connaughton discussed the nation’s major trade partners, including areas of North America, Europe and Asia. 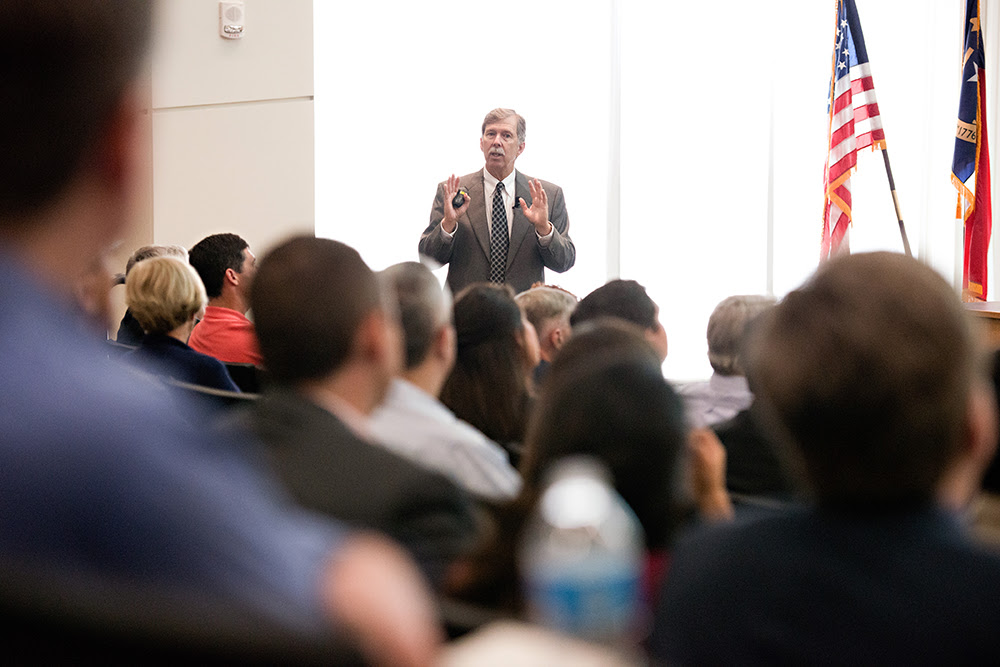 “Prior to 1913, the primary source of funding for the U.S. government was tariffs on international goods,” Connaughton said. “This source of funding has dropped significantly over the years, especially as income tax laws were introduced.”

Connaughton said, “For 2018, North Carolina’s real GSP is forecast to increase by 2.9 percent over the 2017 level. Fourteen of the state’s 15 economic sectors are forecast to experience output increases during 2018. At 2.9 percent growth, the state is nearing the 3.0 percent growth level.  That would be the strongest growth rate since 2006.”

For 2018, 129,000 net additional jobs will be added in North Carolina, an increase of 2.9 percent over the previous year, Connaughton said. “At this rate, this would be the biggest job growth recorded since 2006 in the state.  Through July of this year, North Carolina has already added 79,000 jobs – more than all of last year,” he said.

By December of 2018, the North Carolina unemployment rate is expected to be around 3.9 percent.

Connaughton presented his quarterly forecast as part of the Mid-Year Economic Update, sponsored by Barings.

Should You Go With Permanent Outdoor Lighting?

Why Estimating Software Is a Modern Move For Handyman Business