Governor McCory just took a trip to Trump Tower in NYC yesterday to meet with President Elect Trump. Most insiders are now saying the meeting was to determine which position within Trump’s campaign that McCrory might fill.

“Gov. McCrory and the President-elect had a chance to get to know each other pretty well on the campaign trail,” commented Trump’s spokesman Jason Miller in a press release. 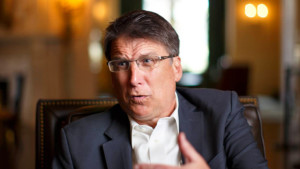 Miller went on to talk about McCrory’s experience with education, job creation and energy modernization. As Governor, McCrory created the largest education budget in the state’s history and touted two notable bills he’d signed as governor: the Energy Modernization Act of 2014, which lifted a 2012 ban on fracking, as well as the Regulatory Reform Act of 2013 in regards to job creation and the .

Governor McCrory officially conceded the governor’s race to Roy Cooper this past Monday after weeks of fraud speculation and recounts.

How do you feel about McCrory filling a top national position in Trump’s administration?