Topgolf‘s new Charlotte location was approved last June, and in less than a year, they’ve already finished most of the construction of the new facility, and are now planning to host a grand opening within the next few months.

Topgolf Charlotte will be a futuristic “golf entertainment complex” offering targeted games where players hit ‘microchipped’ balls as close to various targets and special zones as possible. The balls individually record their location before and after they are hit, and give individual scores for each player.

They will also feature a full food and drink menu – catering to golfers and non-golfers of all skill levels.

This past January, they erected their massive net poles, which range in height from 160 feet to 180 feet, with the taller poles equal in height to an 15-story apartment tower.

The poles and net are necessary to prevent the high-tech golf balls that will be struck from the facility’s three levels of climate-controlled hitting bays from soaring off of the 14-acre site.

According to contractor Arco Murray, all of the major structural components of the site are complete, and they’re hoping to finish the interior work and state-of-the-art landing turf within the next 2 months. 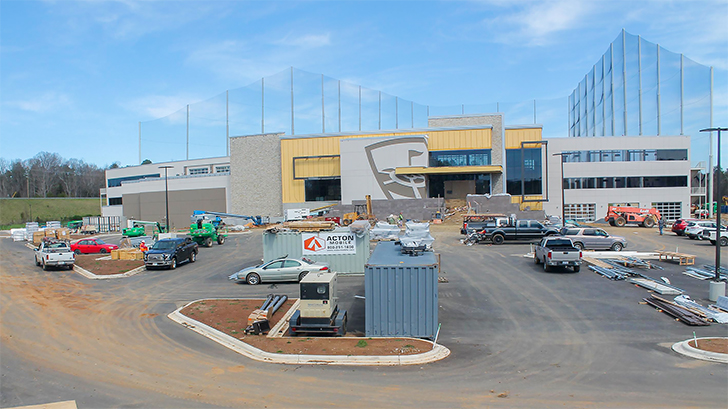 Here’s a time lapse video of the construction on the site:

Top Golf is now planning to host a grand opening at their new location across the street from the Whitehall Corporate Center (that place with the giant spinning head fountain) sometime in late May or early June of 2017. The company expects to bring 480 new jobs and a $30 million paycheck to Mecklenburg County in taxes over the next 20 years.